My computer says that I need to be the administrator [to perform a task], but I already

am! Any ideas as to what is happening?

You’re not the administrator. Not really.

But, as the result of a new security feature introduced in Windows Vista and
made less obnoxious in Windows 7, you’re not the real administrator by
default.

But you can be.

UAC, or User Account Control, is an important security feature that, in
essence, makes the account that you’ve created to be the administrator not have
administrative privileges by default.

The reason is that most users run as administrator on their own
machine. That means that without this feature, any programs you run also
have full administrative privileges.

Whether you want it or not.

By administrator-capable, I mean that Windows will often ask you for
permission before performing tasks that require true administrative access and
you’ll just have to say yes or no. 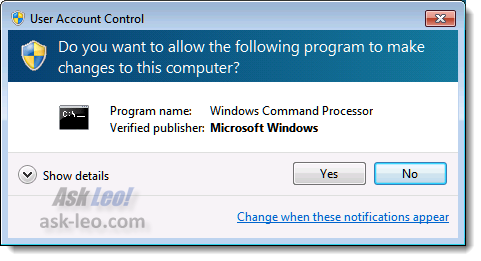 Accounts which are not administrator-capable will have to supply the
administrator password to prove that the user has the authorization to do
something that requires administrative privileges.

Not all programs are written in such a way that they can ask and it’s not
always possible to ask in every situation. The best that can happen then is to deny whatever it is you’re attempting if it requires administrative access.

Many programs have this option, including the Windows Command Prompt, which is where I most often use this trick. I’ll use the more commonly used Windows Explorer as an example.

Ask Leo: How do I keep my information on a shared computer private?

Chris Pirillo: How & When to Run as Administrator